Sawflies are very common insects on Eucalypts. There are a number of different species of sawflies which can cause severe defoliation of our native trees.

The young, or larval stages of sawflies are commonly known as "spitfires" because of their habit of ejecting a yellowy-green, eucalyptus smelling liquid when disturbed.

The larvae occur in large groups often ranging in colonies of over a hundred individuals that cluster together on the branches of eucalypts. The clusters are mostly seen during the day, however during the night these groups disperse to feed singly.

This clustering behaviour offers some protection from natural enemies. Very young larvae form groups with their heads all pointing outwards to form a defense against natural predators. 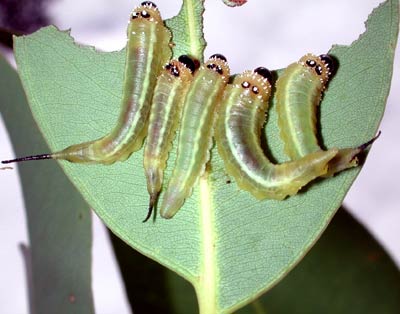 DAMAGE: In general they do little damage if they occur on large trees and there are few larvae. Eucalypts have a great ability to regenerate after an initial attack unless such factors as drought or other insects further weaken the trees.

However occasionally major outbreaks do occur and may cause considerable damage to trees particularly if the trees are young. In large numbers, sawflies are capable of rapidly defoliating whole trees and may cause dieback, stunting or even death of small trees. For this reason, they must be regarded as having the potential to be significant pests of eucalypts. Young larvae feed on one surface of the leaves while older larvae eat the whole leaf, often leaving only the midrib.

CONTROL: There are a number of natural predators that will control these pests including birds and predatory wasps. Chemical control, via stem injection, is also successfull.

Talk to our team today to discuss your options in controlling sawfly larvae.